The first giant structures of a new 175-bedroom Inverness hotel have risen on derelict land at a former swimming pool site that has lain empty for more than 20 years.

With a prime Ness riverside setting – described as one of the Highlands’ most prominent – the Glebe Street development continues a boom in city hotel-building. It is expected to provide a timely economic boost and help ease seasonal shortages in guest rooms.

Planning approval for the project was granted in March last year, with groundwork beginning the following month. 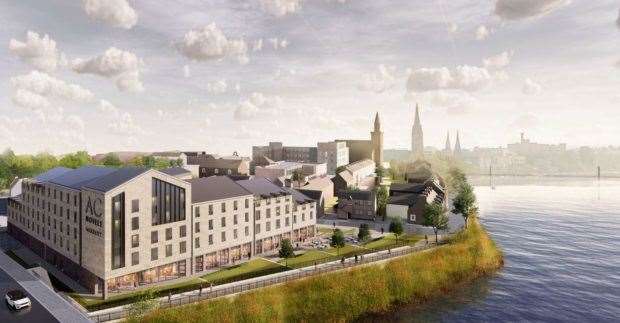 Previous applications for the four-star hotel development – set to be part of the Marriott AC brand – were rejected by councillors critical of the designs by Amsterdam-based Vastint Hospitality. It was later reduced in height by one storey.

The main building will hold around 151 bedrooms, with a further 24 in a separate block. It will also feature a bar and dining area, meeting space and a gym.