Battling the forces of nature in Glen Feshie

Battling the forces of nature in Glen Feshie 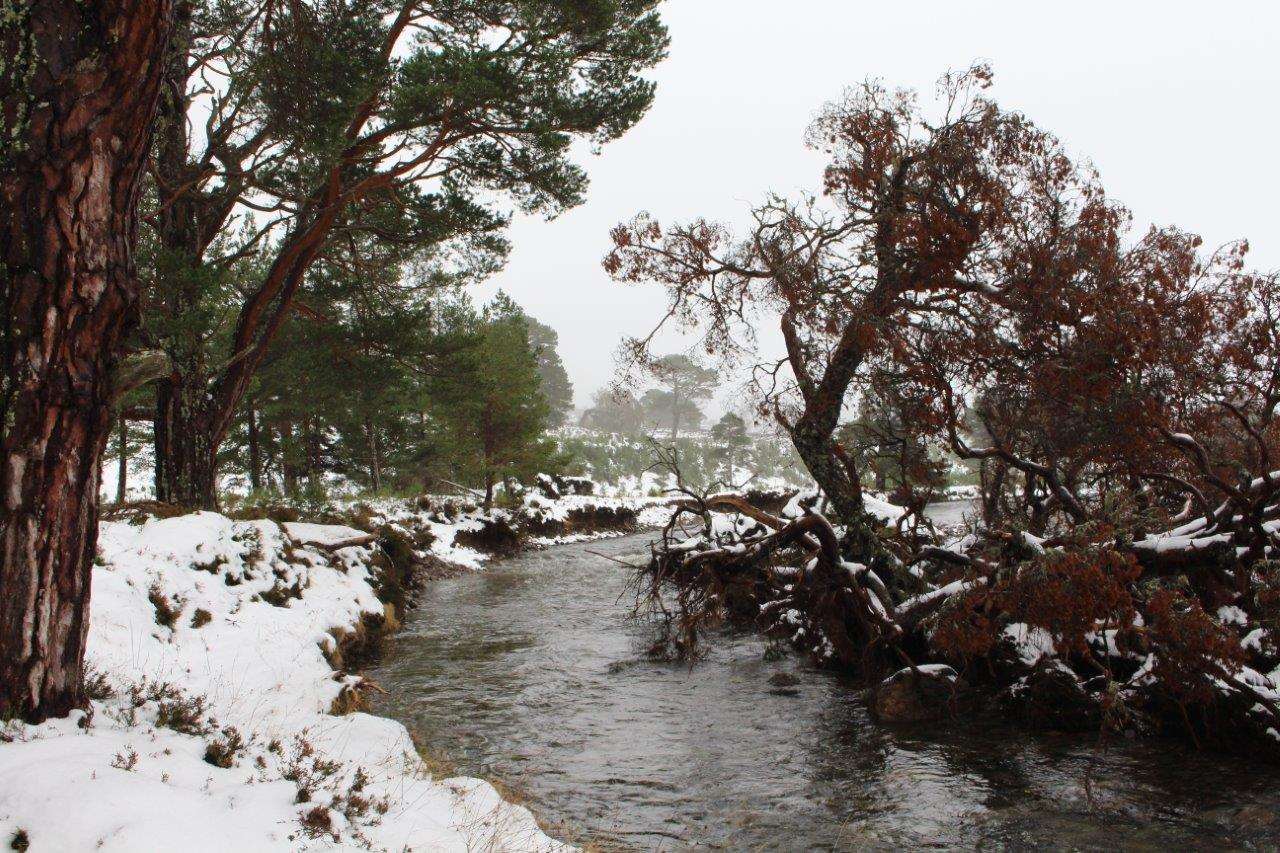 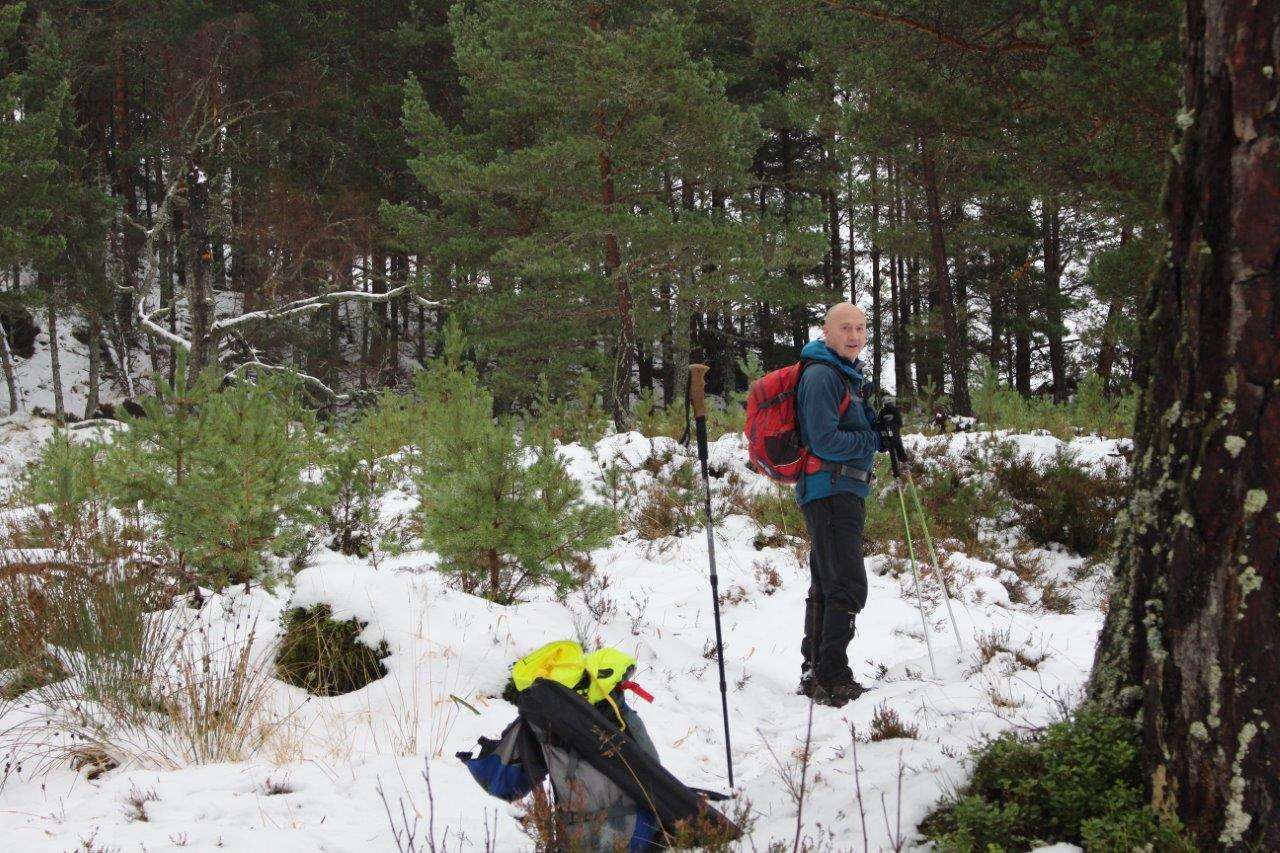 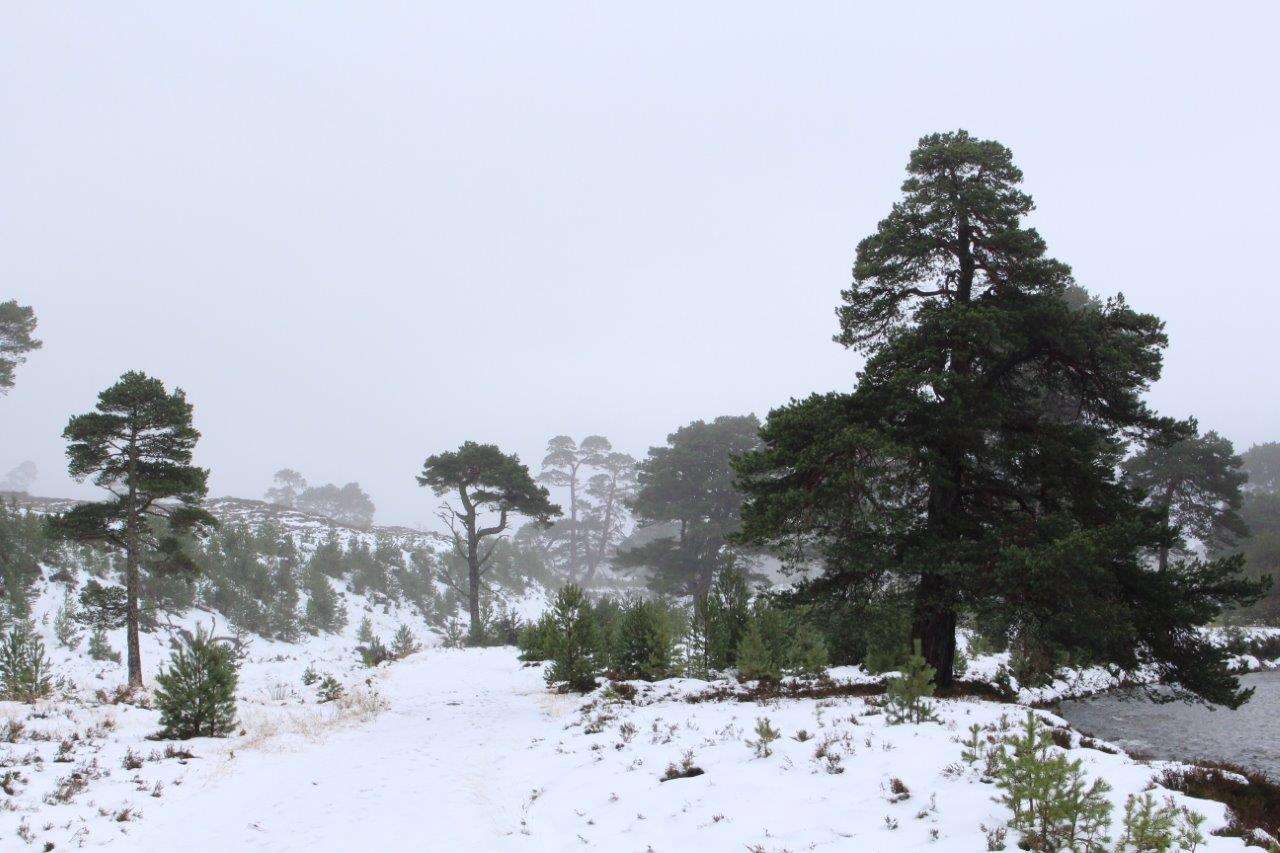 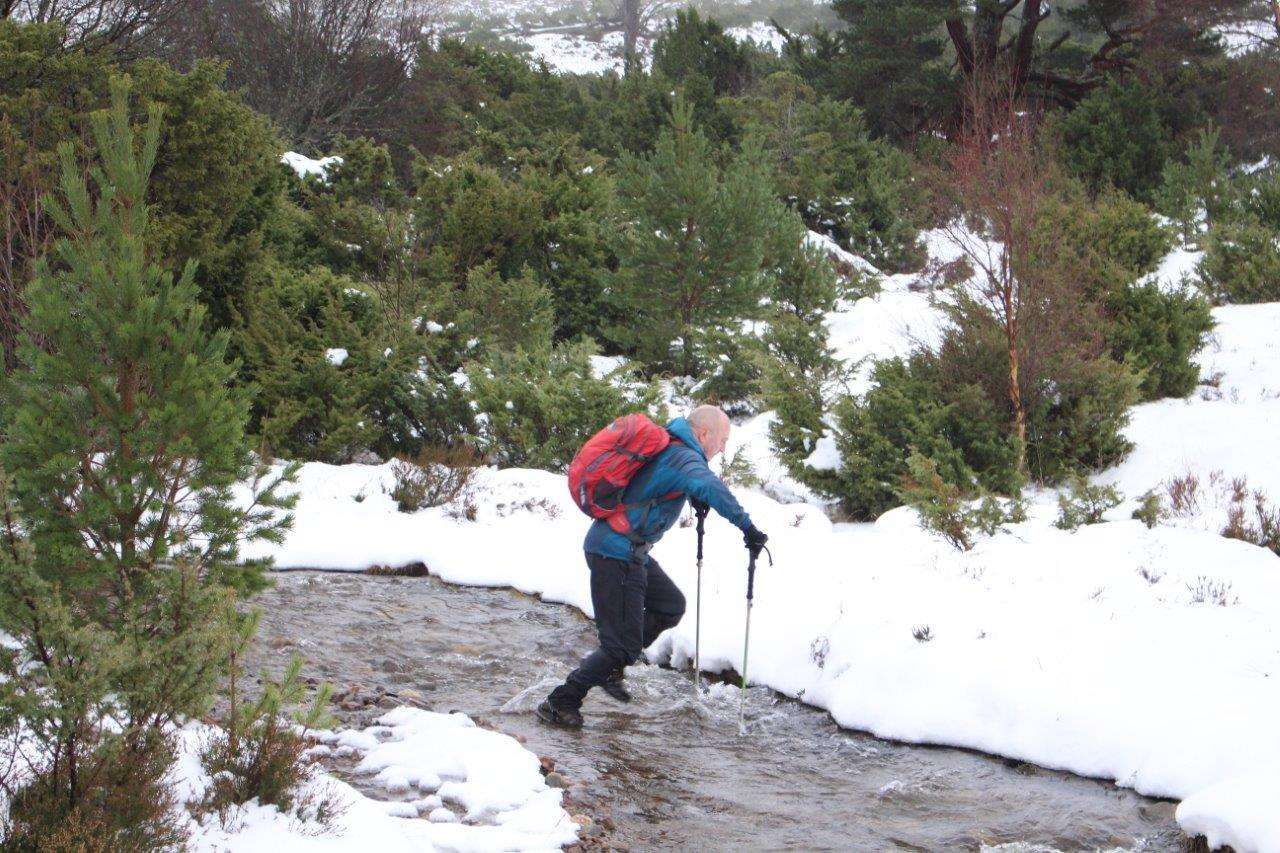 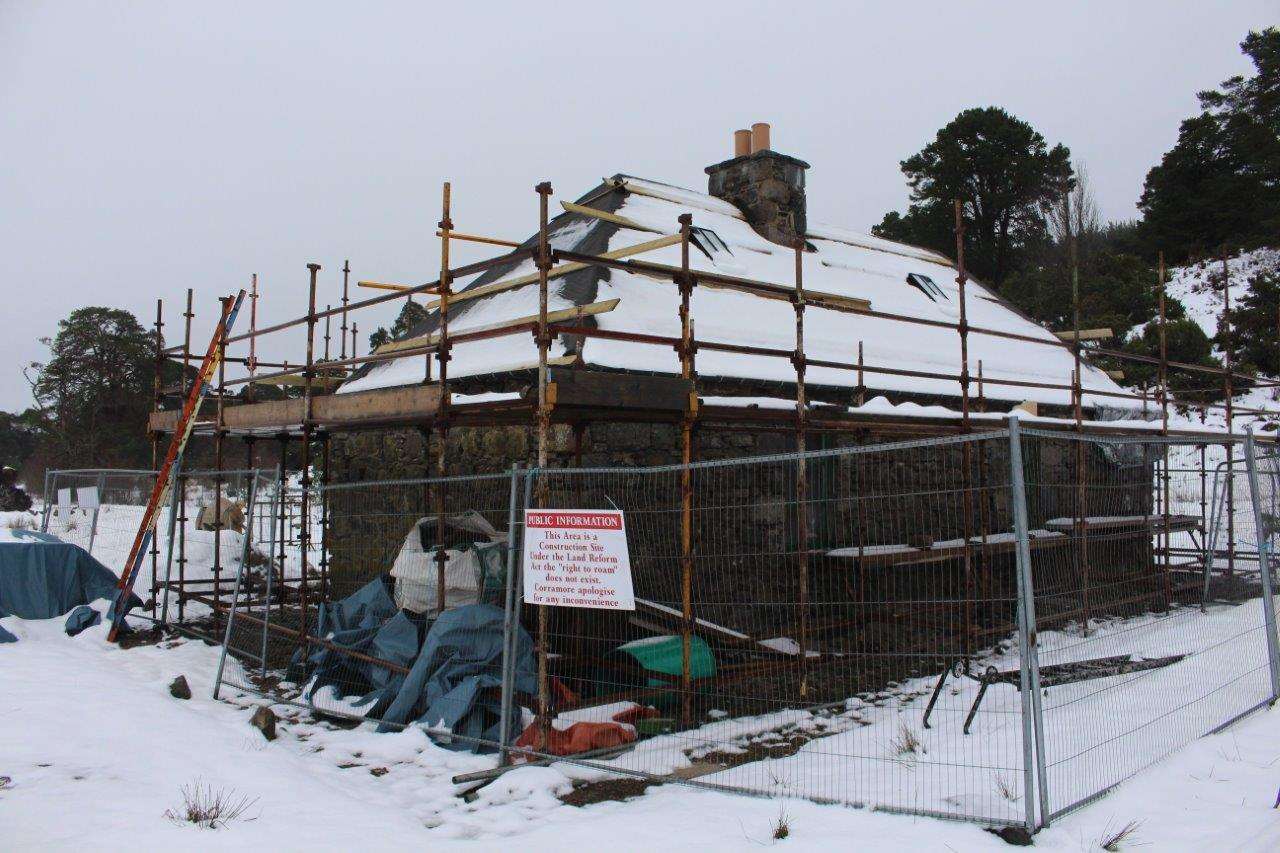 In search of a walk into the wilds while the clouds hung low on the mountains and the wind would be blasting over the high tops, I found the perfect escape.

Glen Feshie is a magnificent setting at any time; wild, remote, full of history and folklore. With snow underfoot and the white clouds pressing down, it took on an ethereal quality.

It used to be possible to do a circular walk up to the bothy from the car park at Auchlean, but the bridge over the River Feshie that was washed away in 2009 has never been replaced. We would have to settle for an out-and-back trek through this beautiful glen.

Our target was the Ruigh Aiteachain bothy, though we knew it was closed for renovations. We didn’t plan to stay overnight anyway – it’s only four miles out, so an eight-mile walk would be a great stretch of the legs on a cold winter’s day.

There’s no parking at the end of the road but there’s a large car park about a kilometre before, so we set off along the tarmac, reaching the footpath sign beyond a turning area. Keep right at the fork immediately ahead and continue to a gate, where you enter the Glenfeshie Estate.

Here we encountered our first of quite a few difficulties of the day! The Allt Fhearnagan was tricky to cross, with temperatures beginning to rise and snow melting off the invisible hills above.

Safely across, it was a lovely stroll along the edge of the treeline and through open country with views to the River Feshie. Keep ahead rather than cutting towards the bridge that’s visible over to the right.

Eventually we came to the biggest problem. When I’d mountain-biked through Glen Feshie from Glen Tilt a few years ago, there were newly built paths with solid steps leading down to the Allt Garbhlach and back up the other side. Today was a different story. The stone steps had been washed away and the river was undercutting the hill which the path was on.

We negotiated a safe route down and over the burn before staying away from the edge on the far bank.

Further along we could see massive trees washed out into the river, and more whose roots were exposed and would soon join their watery partners in the Feshie.

After returning from our walk I spoke to Thomas MacDonnell, director of conservation and forestry at Wildland Limited, the company which manages Glenfeshie and eight other Scottish estates on behalf of landowner Anders Holch Povlsen.

He told me how the land was being managed to reduce the problem in the longer term.

He said: “There was a big flood event last winter that caused the steps to be washed away.

“We’re fighting the erosion but only by natural processes. There has been a lack of trees on the hillsides and the peat bogs are not storing water as they should.

“We have been reducing the number of deer and regenerating the forest. Those 250-year-old trees in the middle of the river are causing it to start to divide, creating islands. This is natural braiding, which minimises the force of water coming down the river and causes it to lose velocity.

“The river will always be dynamic but once the woodland is in place the path can be put in a different place again. Trees such as alder along the riverbanks will help to stabilise the gravels.”

Mr MacDonnell added that during last winter’s flood it was estimated there were 450 cubic metres per second of water when the river was in spate; it’s thought that in the muckle spate of 1829 there were 650m3/s.

The force of the Feshie is clearly not an easy thing to get under control but there are visibly more younger trees here now and this long-term approach should pay dividends in the future.

As we continued we negotiated a few more crossings and diverted away from the edge of the river where it was safer to do so. We soon reached a better track and followed this – over another burn, the Allt Choire Chaoil – to Ruigh Aiteachain.

Scaffolding was still surrounding the building, which the estate is upgrading with a new stone porch to allow for a stairway to the sleeping platform. A new floor is also being installed downstairs, plus bunks, and wood-burning stoves to reduce the risk of fire.

Mr MacDonnell said the estate was investing more than £200,000 in the bothy, and he expected it to reopen in the spring.

He said: “It has been open to the public and will remain open to the public. We’re doing this work to make it safer for visitors. The front section being added is to allow for stairs to be put in so there’s a fire escape from the upstairs sleeping area.

“We’re retaining the stone walls; it will still be a rustic experience and basic accommodation and it will look appropriate.”

He also said there were toilet facilities at the bothy in a separate shed and urged campers to use them as well.

“We would ask people who are camping to avoid the flat ground just beyond the bothy, as this is where the black grouse lek takes place,” he said. “Please camp in the vicinity of the bothy and use the toilet facilities provided.”

As the bothy wasn’t available to us, we found a perch under a nearby tree to enjoy a peaceful brew from the flask and a bite to eat. Despite the cloud cover, the rain and snow had kept off, so it was lovely to be out in the fresh air in this beautiful setting.

To add a bit of interest, we added a short loop on our return to pass by the remains of the Carnachuin Bridge. Just as it was when I passed on my mountain bike, the timber for a replacement crossing was lying alongside the track but clearly no progress had been made in the last few years.

I asked Mr MacDonnell what the situation was with the bridge. He told me: “We wanted to rebuild it the same as it was but the Cairngorms National Park Authority rejected our planning application to rebuild it as a replica, saying it had to be classed as a completely new bridge, so it would need steel.

“The timber is still there. We bought in pine from Rothiemurchus and even had it cut on a yankee saw to give it authentic marks.

“If it was possible to build it as a replica, we would still like to do that.”

He said Carnachuin was a well-established crossing point, with evidence of a bridge being there since at least 1870. The one that was washed away in 2009 was one of the last remaining trestle-style bridges.

We will have to wait and see if any progress is made on the planning issue, but for now our walk would have to return by the outward route.

As we reached Auchlean, the cloud had lifted ever so slightly. We had enjoyed a great day’s walk and seen the full force of nature in the waters of the Feshie.

How refreshing it is to hear about an estate working with nature to help overcome these problems while also investing in paths and bothies – and bridges, if they could – for walkers and others to make use of.